A high school essay about a near-death experience. All true, and only mildly embellished. Big word make teacher happy.

Every proper adventurer has a line that they do not cross—a boundary of risk that they have established to keep themselves alive. To cross this line is to play chicken with the will of nature, and very few choose to spend time on the other side. Unfortunately, not everything is always under our control…

It was a magnificent day. In the shade of Angel Food wall, the air was cool and crisp, and a small stream twisted its way through the scattered boulders. Only a few miles away lay Las Vegas, yet the walls and canyons of Red Rock State Park felt far removed from its neighbouring playground of greed and lust.

So far, our climbing trip had been without incident. It was my first time in the park, and I loved it already. I loved the beauty and the atmosphere of the place—how it could rain all night and be dry by morning. What I liked most of all, though, was the sense of adventure that it invoked inside me. Here, I could explore. Endless sandstone towers dotted the skyline and claustrophobic slot-canyons would lead to crystalline pools, where birds chirped in the confines of their desert sanctuary.

Not only was the scenery breathtaking, but the climbing was outstanding as well. The banded rock made for an experience very dissimilar to the smooth granite of Squamish, and it had taken me a while to adapt to the uniquely shaped holds. These new skills were now going to be put to the test, however, and I was a little nervous standing in the shade of this enormous wall.

Nevertheless, starting up the first pitch, I was relaxed. The harrowing runout off the ground was surmounted without difficulty, and I felt in tune with the vertical landscape around me. I carefully navigated myself around several blank sections of rock and basked in the pleasure of having nothing but air beneath me. It was beautiful. The surrounding peaks glistened in the morning sun and birds flew overhead, propelled effortlessly by the hot air.

In my lassitude, however, I nearly forgot about the upcoming difficulties. Tunnel Vision, our route of choice, has a reputation for being somewhat scary. The wide cracks and full-body slots provide only scant opportunity for protection, and there are sections which demand quasi-unprotected moves with serious consequences. I, however, did not yet appreciate the severity of the route and was content to simply admire the immense towers and shaded canyons of the surrounding landscape.

“Off belay!” I yelled upon reaching a comfortable ledge, one just big enough for me to build myself a station.

“You’re off belay, Alex. Just give me a sec,” my father replied, while simultaneously trying to don his size thirteen climbing shoes and tame the mess of rope that he had acquired. This procedure was deemed futile, and I would later be informed that it resulted in some rather obscure profanities.

The more we climbed, the harder it got. Soon after my father rejoined me, I found myself fully wedged inside a rounded groove, not able to turn my head for fear of getting my helmet stuck and wondering how Santa Claus did it. I had somehow managed to stick myself inside the crack at an acute angle, and it required an immense effort to move upwards, even by a few inches. After spending close to an hour battling my way up the chimney, it was more than relieving to flail through the last couple of moves and reach the next station.

Thankfully, the next few pitches passed by without incident. As we climbed higher and higher, I grew more and more excited for the upcoming obstacle. Three-hundred feet… four-hundred feet… five-hundred feet. It was nearing. High above the valley floor lay an enormous detached pillar, seemingly held up by sheer force of will. At over a hundred feet tall, it seemed to violate the fundamental laws of physics. No climber wanted to be the first one to remind gravity of its glaring oversight, and so we knew to tread lightly.

As the blazing sun reached the apex of its climb and began its leisurely descent into the horizon, we neared the base of the pillar. Contrary to what might be wise, Tunnel Vision, as its name implies, ascends the natural cavern formed behind the pillar with an entire pitch of vertical spelunking. This was the appeal of the entire endeavour, and I viewed the upcoming difficulties with a mix of eager apprehension and wary excitement.

Finally, I spotted the mouth of the beast. At the base of the pillar, a huge hole bore straight into the side of the mountain, beckoning like a Siren’s call. I thought nothing of it. I paused only to tie my shoelaces, and then—in my vacuous excitement—I jumped right in. 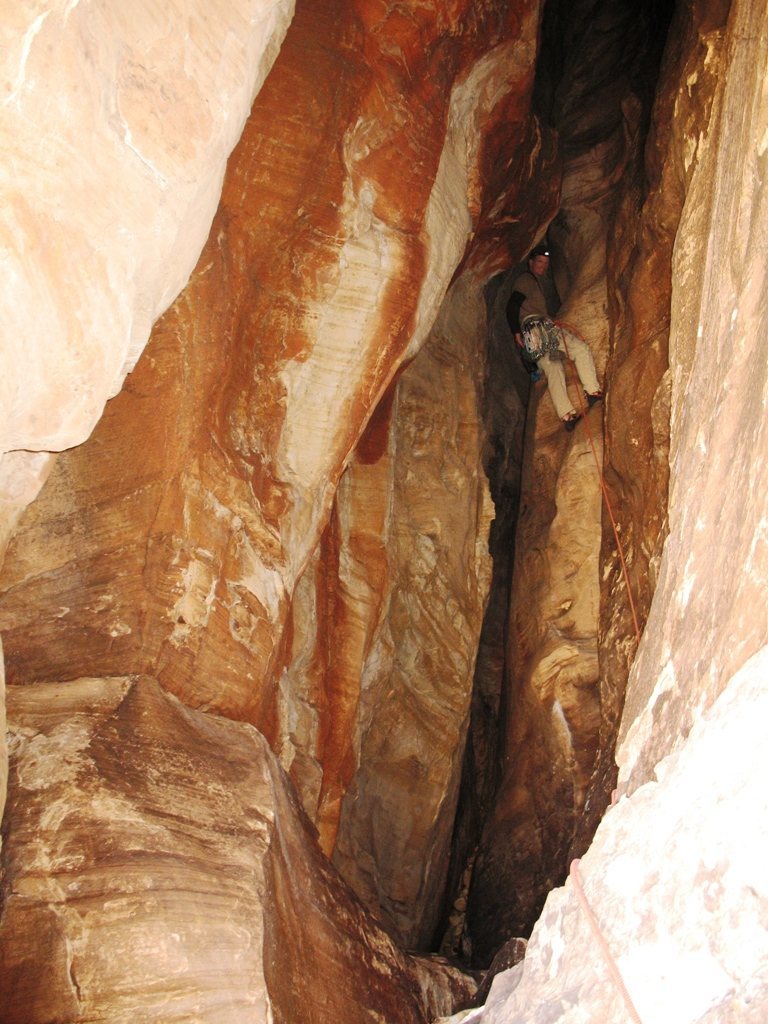 Climber (not me) in the lower section of the tunnel. Note that this picture makes it look slightly steeper than it really was. Credit to Scott Z. on Mountain Project.

The lower section was cleared with ease. I twisted and squeezed, stemmed and extended my way up the erect labyrinth with several inhuman body contortions suited more for an interpretive dance lesson than for the rock. Nevertheless, so far it was fairly straightforward, and I paused only occasionally to ponder the drop below me. A drop that would most likely not be arrested by the several marginal wires that I managed to place, and would in all likelihood result in me plummeting into the depths below.

The dank cavern slowly gave way to my dance, and I was starting to gain confidence when suddenly, I was confronted with a dilemma. I could see a trickle of light only a few dozen feet above me, and I could clearly see what I thought to be my destination. However, there was no clear way to go. Off to the left my only option was a ten-foot section of horizontal chimneying above a slot whose bottom I could not see. Needless to say, this terrified me. The only other option was to go up. Above me lay an eight-inch wide crack that led upwards, seemingly all the way to my destination. It was just wide enough that I knew I would be able to wedge myself inside it and squirm my way to the top. Or so I thought…

The moment I entered the chimney, I knew that I had gone the wrong way. The slightly off-vertical wall upon which my feet smeared desperately was slippery, and my feet skated as I tried to crawl upwards. It was terrifying. Down-climbing was out the question—it is almost impossible inside a squeeze chimney, and without any gear to catch me it would be suicide. My only option was to continue upwards, but there was hope.

Above me, I had spotted a tiny fissure in the rear wall. Not large, but more than big enough for me to place a cam. As I squirmed upwards like a crazed inchworm, my gaze was locked on the beautiful crack above me, only a few feet away. Six inches… three inches… Santa wanted a career change. I stretched my hand as far as it could reach; my feet skated. After a final desperate thrutch, I grabbed my beloved #1 Totem cam, shoved it into the crack, and clipped my rope to it with the relief of a man who has just escaped his fate. Suddenly full of unfounded confidence, I stretched for the large hold above, and felt my feet finally abandon me. I was left hanging there by one hand, attached to the rock by the single piece of protection that I had placed just moments ago.

When my dad finally finished the pitch and joined me at the station, he was full of laughs. “That was awesome!” he proclaimed, looking back down into the chasm below, “although that number one down there was a bit stuck.”

He, of course, had no idea what I had just been through. While I had been thrashing for my life high above him, he had sat at the base of the cave belaying, blissfully unaware and admiring the view. I thought it best not to tell him.

That night, the stars were especially beautiful. As we walked down from the summit under the moon’s light, I knew that I had crossed the line, and that a simple lapse in judgment had almost cost me my life.